Dense and exciting yet ever so energetic with sliced cooked-apple, honey and peach character. Full-bodied, agile and long. Shows light honey, pie crust and dried mango on the finish. Tight and reserved. Needs two or three years to come around. Better after 2022 release.

Olivier Leflaive is a negociant house in Burgundy's Côte d'Or. The house produces a wide range of wines predominantly from the Chardonnay grape variety, from both village- and region-level appellations, and from some of Burgundy's most famous vineyards, including Le Montrachet. In 1990, Olivier Leflaive was given the reins of the Domaine Leflaive estate, alongside his cousin Anne Claude Leflaive. He left in 1994 to set up his own negociant business. Today, Olivier Leflaive has 17 hectares (42 acres) of estate vines, as well as approximately 100ha (247 acres) of growers' vines. These are spread across the Côte de Beaune, Côte Châlonnaise, and Chablis, although the most important holdings are in Meursault and Chassagne-Montrachet. Olivier Leflaive makes wines from several Grand Cru vineyards, including Corton Charlemagne and Bâtard-Montrachet, and several notable premier cru vineyards, such as Meursault Charmes and Puligny-Montrachet Les Pucelles. After harvest, the grapes are softly pressed and allowed to settle before fermentation, which takes place in both vats and oak barrel. The wines go through malolactic fermentation, are lees-stirred and then are put in oak barrels for aging. The proportion of new oak is dependent on the wine. Along with its top wines made from Chardonnay, Olivier Leflaive makes a few village-level red wines from Pinot Noir, and a white wine from Aligoté. 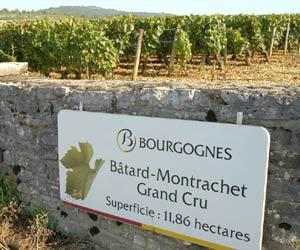 The climat's position at the bottom of the hill means that the soil is deeper here than in the other grand crus. Bâtard-Montrachet's pebbly limestone soils have a higher proportion of clay, and so drainage is not quite so effective as higher on the hill. However, the soil still allows for contact between the vines' root systems and the limestone below, which makes for healthy, strong vines, as well as possibly contributing to the subtle mineral characteristics present in Bâtard-Montrachet wines.

These limestone soils are also credited with contributing to Bâtard-Montrachet's mesoclimate, as they reflect light back onto the vine canopy, aiding the ripening process. Bâtard-Montrachet has a gentle incline that faces the vineyard toward the east, giving the vines exposure to the morning sun, which helps warm the soils. The temperate mesoclimate is important in Burgundy's cool continental climate, as it helps the grapes reach full phenolic ripeness.

Bâtard-Montrachet's name, like many in the area, is said to derive from the process of inheritance. A vineyard on the southeastern slopes of the Montrachet hill is thought to have been divided up by a local lord, the Seigneur de Puligny, between his oldest son, the Chevalier; his daughters, the Pucelles (maids); and his illegitimate son, the bâtard, or bastard.

After a year of hard work in the vines, the time to harvest has come. It is always with great enthusiasm and not without shuddering that we approach this crucial period.

About a hundred students, friends, seasonal workers, members of the Leflaive family and many others, often regulars, get together for about 2 weeks. A backbreaking job, largely compensated by the meetings, the laughter, the songs… in short, great moments of sharing !!

Entirely manual, the cut respects the vine. Mechanical harvesting is our enemy, it deteriorates the plant material and will never have the experience and relevance of the harvester's eye. There is enough unabsorbed sulfur to warrant a thorough aeration if you're going to try... The vines were planted by Francois' grandfather in 1913. True old vines!  ABOUT  The Charmes...